• Branded Smart Cards & Smart Tags for your members
• Your own Branded Reward Website & Mobile app for your members to view their reward accounts and more
• A “members only” e-commerce platform- allowing members instant access to exclusive deals
• Bulk SMS as well as other communication and marketing tools to engage directly with your members.

Business Rewards is available for as low as K500 per month. 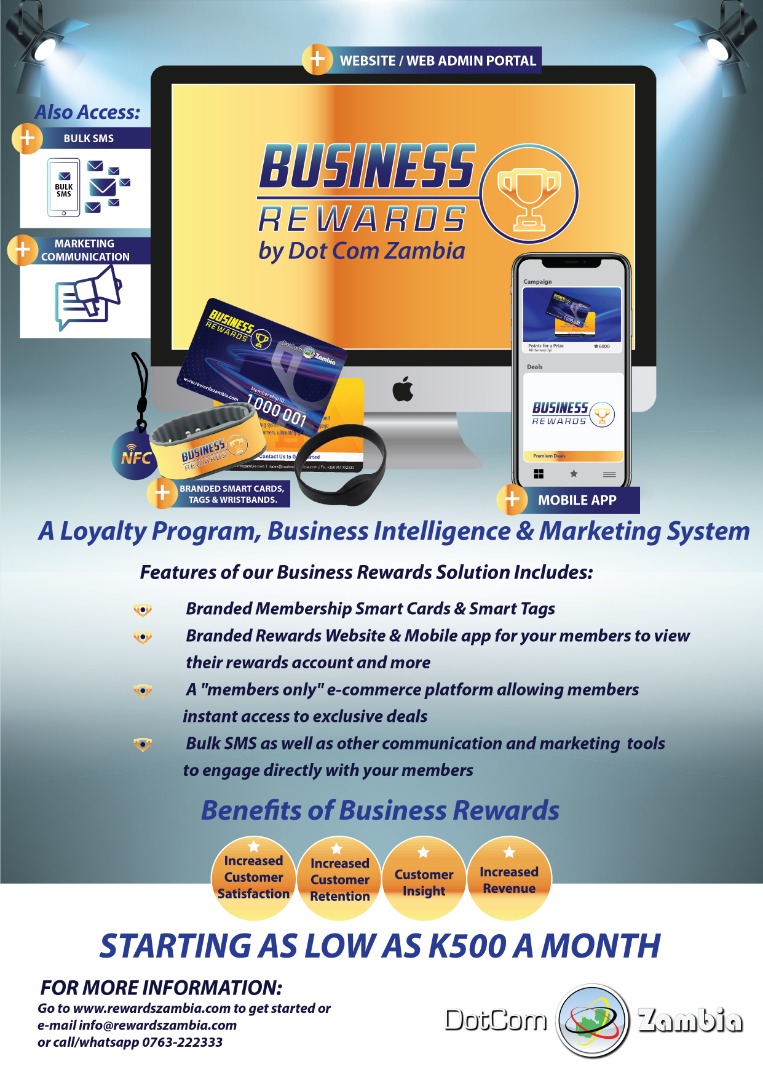 THE Competition and Consumer Protection Commission (CCPC) has disclosed that it is reviewing the alleged cartelistic conduct perpetrated by some market players in the distribution value chain of clear beer products in the country.

CCPC public relations officer Rainford Mutabi said in a statement that the concern arises from the influx of complaints that Commission has received.

Mr Mutabi said some distributors are alleged to have formed cartels with middle-men selling alcohol beverages at exorbitant prices.

“In view of the foregoing, the CCPC continues to review this matter and will share the findings upon conclusion,” he said.

ALL eyes are focused on the beautiful country of Qatar as the world’s greatest football tournament, the 2022 World Cup, kicks-off in Qatar, a country famously known for its luxury tourism industry.

MultiChoice, the official broadcaster of the Qatar 2022 World Cup has reaffirmed its commitment to broadcast all the 64 world cup games to customers on it’s DStv and GOtv platforms.

“Our aim is to deliver a front-row view of the best football titles in the world to our valued customers and as such, DStv and GOtv customers will have access to watch the 64 live games on both platforms on different Super Sport channel offerings,” said Mrs Leah Kooma, Managing Director, MultiChoice Zambia.

“SuperSport is the only true home of football in Africa, offering a range and depth of action during this World Cup in full HD, great commentary and access to magazine shows that no other rivals can match – it’s literally ‘Here for Every Fan,” remarked Kooma.

As part of the hyper-local strategy and the organization’s ongoing efforts to enhance its customers’ television viewing experience, MultiChoice announced SuperSport would expand its channel offering for football fans during the Qatar 2022 World Cup.

To ensure that customers get the best out of the ongoing Qatar 2022 World Cup and beyond, MultiChoice will make all the world cup action available for streaming on the DStv app and Showmax Pro for customers to watch the tournament on-the-go.

MultiChoice hosted an epic watch-party in Lusaka for, customers, sports journalists, sports commentators and analysts to drive conversations around the World Cup football action in Qatar.

Budweiser rallies over influencers across the globe for FIFA World Cup Qatar 2022, with Slap Dee as the Zambian star to take on the global campaign

BUDWEISER has been a long-standing sponsor of the FIFA World Cup and this year, the brand has opted for an influencer-heavy activation that will put participating personalities in a music video for “The World is Yours To Take” by American Rapper Lil Baby. Budweiser is gathering over 100 influencers from all over the world in a major FIFA World Cup campaign spearheaded by football icons Messi, Neymar and Sterling, who will be flown to Qatar to make content for their followers and the Budweiser brand.

The popular Zambian Rapper Slap Dee will feature in the music video and perform alongside Lil Baby and other international superstars on a global stage designed by Budweiser.

As part of the global campaign to highlight Budweiser’s position as the Official Sponsor of the World Cup 2022, these influencers will appear in Lil Baby’s “The World is Yours to Take” music video while also generating individual content during the World Cup 2022 in Doha, Qatar. With a combined following of over 300 million on social media, Budweiser has announced other notable personalities in Africa such as Nigerian Ebuka Obi-Uchendu and South African house music duo TxC who will be among the various famous personalities selected to attend the World Cup 2022 specifically as guests at the trendy Budweiser Hotel and to participate in the events curated by the brand in Qatar.

At home, Zambian Breweries has unveiled limited-edition bottles with QR codes that local consumers can scan for the chance of winning an all-expense paid trip to Qatar and other exciting prizes such as entry to Budweiser-hosted watch parties in Lusaka and Budweiser branded merchandise. Further details of the Budweiser campaign during World Cup 2022 can be found on Budweiser Zambia social media pages using hashtag #BudweiserWorldCup and #YoursToTake.