Last night the overjoyed sports bettor joked: “I’ve been inundated with so many friend requests on Facebook since the news got out that I’ve had to stop responding. I never knew how popular I really was until this big Castlebet win happened!”

Last week Castlebet Marketing Queen Magret Kambikambi followed from Lusaka to Kitwe’s most exclusive 5-star hotel, the Garden Court, to congratulate Salim in person, present him his winning cheque and hand over his wad of cash as well as enjoying a few drinks!

Marketing supremo Ms Kambikambi explained: “We followed Salim in person to congratulate him and help him celebrate his win not because of the amount he won, approximately 35 thousand Kwacha…”

“No, we followed Salim because of the skill he showed in earning this money from such a small stake of just K4! I hope he maybe able to share some advice to educate other Castlebet players on the skills needed to win big like this”

The innovative and exciting new bet option “Shots on Target” – offered only by Castlebet Zambia and not stingy rival betting companies – asks the player to predict whether the number of shots on target (the goal) made by players during a match will be over or under a certain figure.

Last night Castlebet marketing Queen Magret Kambikambi added: “The really interesting this is that Salim achieved this huge payout by betting on a market that other sports betting companies are too scared to offer.”

“At Castlebet we are famous for not hiding games like some of these stingy foreign companies. But it’s not just the number of matches we cover which sets us apart – it is also the much wider range of bet options we make available on each game that we hope to earn the loyalty of our customers from.” 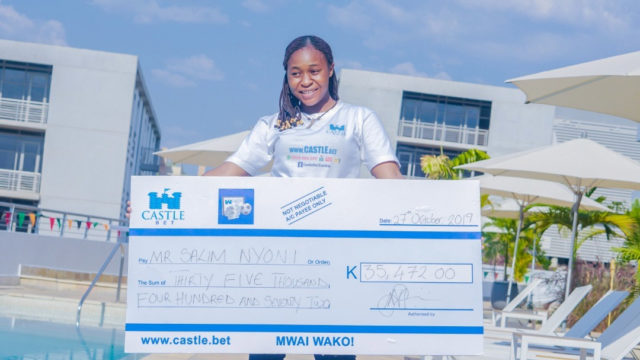 During an in depth interview, Salim revealed more about how we hit the jackpot and collected the jaw -dropping sum of money.

Salim revealed: “I have been playing with Castlebet for about a year now…during that time I’ve been winning and losing at times, but they say winners never quit!”

“I thank you Castlebet for the good bigger odds you are giving us..I am so happy…I don’t think with the stingy odds offered by some other companies, I could have possibly won the same amount.

“I first heard about Castlebet from a friend who introduced me to the site. My friend told me that this site was better than other sites because it offered bigger odds and a wider range of bet options compared to other sites.

Castlebet Marketing Queen Margret Kambikambi said; “We are thrilled to be able to celebrate giving this pile of money to Salim. He is an example to other sports bettors; If you are a soccer fan, never lose hope and like Salim, see if you can win from a small stake a big amount!

Salim continued: “I am planning to buy a plot with the same amount of money. I eventually informed my family and the family was, like, oh awesome!”

Overjoyed Castlebet winner Salim continued: “At first my family had discouraged me from betting..but by the time they saw the amount in my account, they were, like, betting is awesome!”

“With this amount I am actually planning to buy a house and start building a house.” 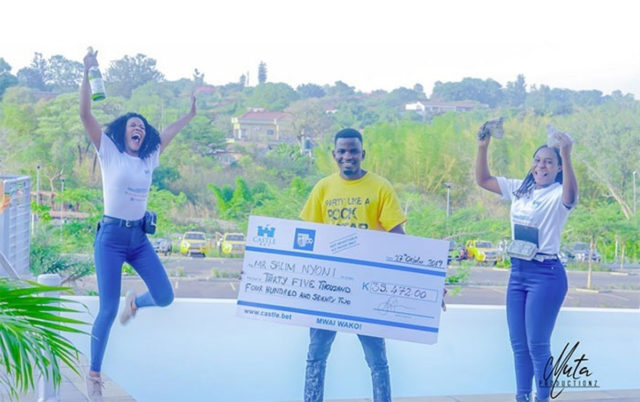 “Betting is not something which is simple, but you need to analyse the teams. I would say you have to persistent because, and maybe focus on the teams you know well! I’m telling you guys to bet with Castlebet as they have good odds and alot of options.”

“I’m very grateful for this money…for just 4 Kwacha I won this amount!

How many teams? Salim originally added 16 teams to his betslip….

Which Games? All bets were on Thursday Europa League matches (Independence Day 2019)

Which Bet Option/Market type? Salim bet all UNDERS on Castlebet’s exclusive “Shots on Target” market not available with other sports betting companies. He picked 16 games in a multiple bet and predicted the “UNDER” option for the number of “shots on target” in each of those games.

Check out now to join by clicking on the link below https://m.castlebetlite.com/?view=company&s=big_winner_01

The Lion that escaped from Munda Wanga Captured

AUTHORITIES have allegedly captured the Lion that escaped from Munda Wanga in Lusaka.

The lion was seen by various residents of Lilayi as it prawled the area.

FIVE (05) passengers have sustained minor injuries while their driver escaped unhurt after a Toyota Gravia they were traveling on overturned near ZNS Makeni along the Kafue Road.

And Police Spokesperson Esther Katongo says contrary to what is circulating on social media that the vehicle flipped on a newly constructed Fly – over Bridge in Makeni, the accident near ZNS – Garrisons, away from the bridge, yesterday around 19:30 hours.

Katongo said the accident happened when driver of the Toyota Gravia registration ALR 965, Mulenga Mwape of Chilanga Parkland, lost control of the motor vehicle due to excessive speed and in the process went to hit into a traffic sign post and the motor vehicle later over turned.

Katongo said during the process of overturning, the vehicle subsequently hit into the flight liner motor vehicle registration number AEG 1154 which was being driven by Tapera Brian, a Zimbabwean national aged 36 years old.

Mutambalilo aged 50, of Kamwala South in Lusaka was charged with one count of Obtaining Money by False Pretences and is scheduled to appear in court soon.

ACC Public Relations Manager Timothy Moono has told Mwebantu in a statement that the suspect on dates unknown but between 1st October 2016 and 31st December 2016 whilst working as a Magistrate at Senanga Subordinate Court in Senanga District of the Western Province obtained K1,200 from known persons purporting that the said money was required as logistical support for him to undertake a Court scene visit when in fact not.

10 year old girl of Mumbwa dies after she was defiled by two men of the same family, police say

Watch trailer for new Zambian movie “A Story to tell”